I have been a fan of Warhammer Fantasy Roleplay (published by Games Workshop) since I was a kid. It was one of the first games I ever bought (I believe it was my third), and my first fantasy game. I really liked the dark, grim setting, even though what was presented was a pretty poor representation of the Warhammer world. I didn’t realize just how cool that setting was until I started with the Warhammer Fantasy Battles wargame in high school.

I never played it much, though it was always in the back of my mind. I found the mechanics a little too complex when I was younger, and so it always had that stigma, even when I was more experienced and probably would have been able to run it with little or no problem. When Green Ronin and Black Industries published a 2nd edition, I was intrigued, but since I was involved in other gaming activities at the time, I didn’t pick it up until recently, and even then, only skimmed through it. It seemed to include more of the rich and fantastic setting than 1st edition, but still seemed quite lacking to me. There was just so much more in the world than what was detailed, so much more you could do!

END_OF_DOCUMENT_TOKEN_TO_BE_REPLACED 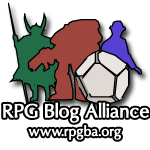